Community Gathers at Vigil for the People of Ukraine 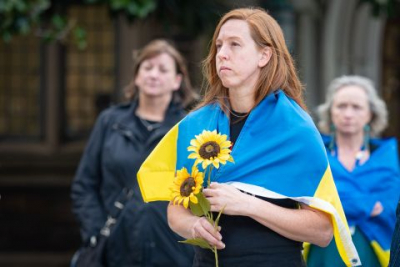 As the heavy Russian assault on Ukraine continued to target military and civilian sites alike, about 100 people gathered outside of Duke Chapel Tuesday to hear prayers, poems and reflections from faculty members and campus religious leaders.

“We are gathered on this ground here to tell the people of Ukraine that you are not alone,” said the Rev. Kathryn Lester-Bacon, director of religious life at Duke Chapel. “We call attention to those who have suffered so much.” 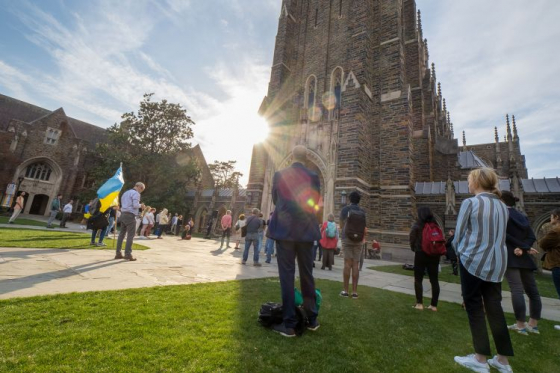 Representatives of the campus’ Christian, Buddhist, Muslim and Jewish communities spoke at the vigil from the chapel steps. Several people carried the blue and yellow Ukrainian flags while blue and yellow ribbons hung from posts outside the chapel.

The vigil was organized with the assistance of the Department of Slavic and Eurasian Studies. Professor Beth Holmgren read poetry from Ukraine and Ernest Zitser, librarian for Slavic, Eurasian, and Eastern European Studies, spoke about the conflict.

“Ukraine is now engaged in an existential struggle, fighting for its survival as a sovereign state,” Zitser said, “against unprovoked military aggression launched its larger authoritarian neighbor, the Russian federation.

“We are here at this vigil to remember what all Ukrainians of all ethnic and religious groups are fighting for, and to mourn the victims of Russia’s war, and to set the intention to do what we can to help.” 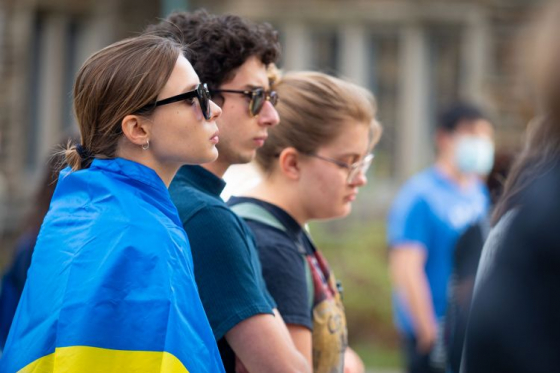 Zitser added that he also wanted people to pray for the young Russian conscripts who according to news reports were not told that they were going into live military combat and given no opportunity to contact their families.

A list of international charities working with the people of Ukraine can be found on the university relief website.